Breastfeeding in art While not an art historian, I am interested for a long time in representations of breastfeeding in art, because everything about breastfeeding interests me. I therefore accumulated over the years, reproductions of paintings and sculptures, old and contemporary photographs, drawings, caricatures, comic strips, and I wanted to show you a small part.

Since the dawn of mankind and on all continents, it represented scenes of breastfeeding, both for the beauty of the thing, and as symbols of fertility, of charity, of maternal love, etc. (or even theology, history, or the grammar!).
And despite the differences due to cultural differences, there are a number of invariants of breastfeeding of a baby or a toddler, who can only remind us of our own experience of breastfeeding mother. See for example this Virgin de Morales (16th century), where the child plunge hand in the bodice of her mother 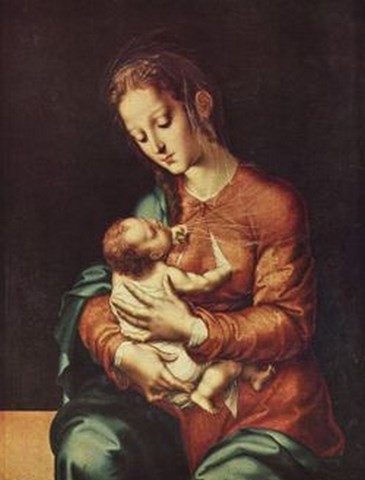 Not having found anything in the parietal art, I begin this journey in time and space by ancient Egypt, where many statues of Isis suckling her son Horus (or him with his breast in a very ritualized, hieratic stance). We found thousands of similar statuettes, which means, given the percentage could reach us, that there should be a grand production.
ISIS was regarded as a great magician, a universal mother, consoling power. The legend says that she would have saved his son from a snake bite through her milk. And the statuettes d' Isis nursing Horus embodied the power of life.

She was venerated not only in Egypt, but in all the Mediterranean (Greece, Rome), and this until the 6th century AD. It is estimated that the cult of the black Virgin has taken the rest of the cult of Isis
Rome also, everyone Gallo-Roman (Vaison in Lorraine), is located in drawings on vases, statues of goddesses-mothers breastfeeding, impassive face, and also many small statuettes with often two children to breast. Have been found in graves of children. It is believed that they also served as protection for women in childbirth.
Found the same kind of statuettes at the very hieratic pose on other continents, for example in Africa or in the pre-Columbian Americas (ceramics representing the Aztec goddess of fertility Xchiquetzal nursing, between 1200 and 1520).

The Virgin nursing take, without solution of continuity, the sequel to Isis and Gallo-Roman mother goddesses. Found in all the museums of Europe, in churches, statues or paintings, or even stained glass (Cathedral of Chartres).
The most known ancient is a mural that is located on the roof of the catacomb of Priscilla, Rome. But it is mainly in the 14th, 15th and 16th centuries that they proliferated, becoming a favourite theme in France as in Italy, Spain and Germany, Austria and Croatia.
There are also, especially in the 14th century, number of small statues or plaques, in more or less valuable material (ivory, marble, stone, terracotta, wood), called Virgin Mother , who had a goal for the protection of women in childbirth and were in the right line of statues of Isis or Roman statues which I have spoken.

I'll show you a whole series of these Virgin breastfeeding, and you'll see that there are both gestures and very ritualized positions and attitudes observed on the spot. Indeed, the artists were surely ask live models, and in many tables, one really has the impression that the child turns breast to watch the painter (and suddenly, watch us), or, without releasing breast, throw him a corner look!
Simplifying, we can classify these Virgin lactating women into two categories: those where the mother presents the breast to a child sitting on his knees (in a position very similar to the statues of Isis) and those where it is child who takes the breast in his hands and his mouth.
This second category, where the child head (while in the first, the child does not have the breast in the mouth), seems more realistic, less ritualized, less codified.
But the tables in the first category are very interesting to study because of the position of the fingers of the Virgin. The mother's hand is indeed laid on her breast so as to insert the nipple between the index and middle. What we call the scissors position, well known to cause breastfeeding problems, possibly because the fingers being on the areola, the baby cannot take it in mouth.
When I started my interest in those breast-feeding virgins, it was the beginning of the 1980s and the importance of the position of the baby at the breast was just starting to be known. I therefore wondered if at the time, women were really putting their fingers on the breast in this way, and whether or not this resulted in problems. or if it was a code designating a nursing Virgin.

A text found on the internet (4) gave me the answer. He studied what he called the gesture nickname-zygodactyle, i.e. precisely this position of fingers posed with the middle and removed index, middle and ring finger being glued one against the other. And it shows that this gesture is used for a long time (the first example of a woman putting her hand on her breast to offer it to the child, is a hittite bas-relief dating from 700 BC) to mean that this is a Mother Goddess nursing a child-God; or of a goddess that squirt her milk into the mouth of a mortal to relieve of his sentence, ensure his salvation or the blessing (see representations of saint Bernard watered by the milk of the Virgin, symbol of the mystical experience of the divine knowledge) or projecting into the space (creation of the milky way by drops of milk escaped breast of Hera/Juno breast-feeding Hercules); or a goddess willing to intercede for a human or humanity to a higher God. The gesture indicates therefore that there is a special breast, a divine, liberator, breast giving immortality. 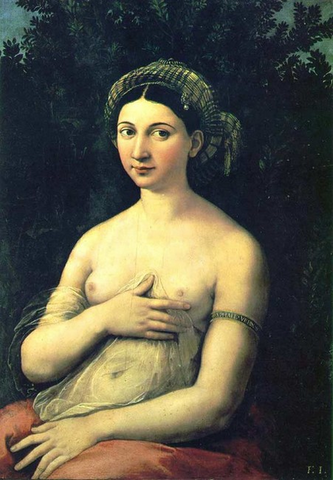 But the impregnation of these representations was such that this gesture can be found in tables where it is not at all question of goddess or breastfeeding: for example, Raphael's Fornarina (although that, he is not taking scissors). And you might think that facing this bombardment of images, real mothers were able to adopt this Jack of the breast, with possibly serious consequences.
Representations of virgins lactating women were so common and many that could do anything, including the portrait by Jean Fouquet of the mistress of King Charles VII, Agnès Sorel (1453/1454), that there was an opportunity to show off her breasts which she was very proud! 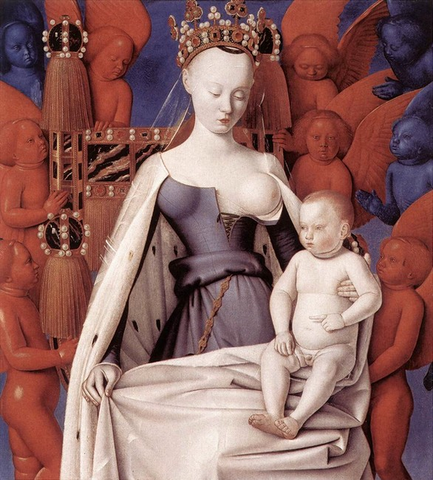 Is it for this that, in 1563, the Council of Trent put an end to this vogue of the Virgin breastfeeding by prohibiting nudity in religious painting? The fact remains that from there, it was necessary to find other frameworks to show breastfeeding. And these were very numerous in the 17th century (2) charities, since there were more than two hundred.
It distinguished the Roman charity and Christian charity. In the latter, we generally saw a woman nursing a baby and surrounded by many children of different ages. In the Roman charity, we saw a young woman giving the breast to an old man. This scene, which today may shock, illustrated the legend of Cimon and Pera, reported by Pliny the elder and found in varying forms in many civilizations (for example, Tectaphos and Eerie, in India). An old man, Cimon, was sentenced to starve to death in prison. The jailer by compassion left enter the daughter, ERI. Surprised that after a few days, the old man is still alive, he realized that his daughter fed it her milk. The news of this surprising Act managed to judges who, with this proof of filial love, gracièrent the old man.

From the 18th century we find little breastfeeding symbolizing something (there anyway, in 1848, the sketch of Daumier entitled the Republic nourishes her children and instructed them). These are rather scenes of daily life (see for example the Utamaro, Japanese prints around 1800, and Kunigochi around 1840, where we see particularly toddlers suck in acrobatic postures), with sometimes militant intent (see scenes of family with baby at the breast which are professions of faith Rousseau) 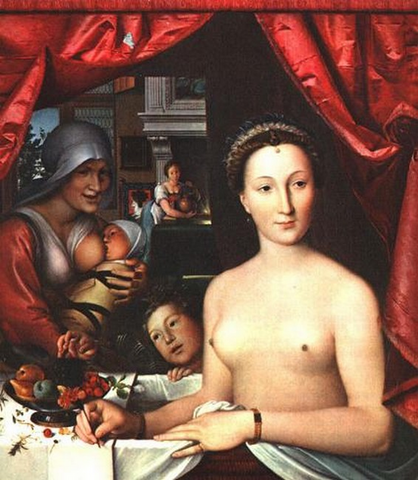 There are also, in Europe and in France, lots of scenes of breastfeeding when breastfeeding women is actually a nurse especially (known generally by the title of the table, because otherwise, nothing differentiates it from another scene of breastfeeding, except maybe, sometimes, clothing, the headdress of the woman). And well before the 18th century. See, for example, this Terra cotta from Bernard Palissy, this portrait of Diane de Poitiers in the bath by François Clouet (1571) where the nurse has been relegated with the baby in the background, or this table of the nanny of Louis XIV, attributed to Simon François de Tours (1638) The 19th century will develop the theme of mercenary breastfeeding and found until the early 20th century my nurse and me by Frida Kahlo, 1937 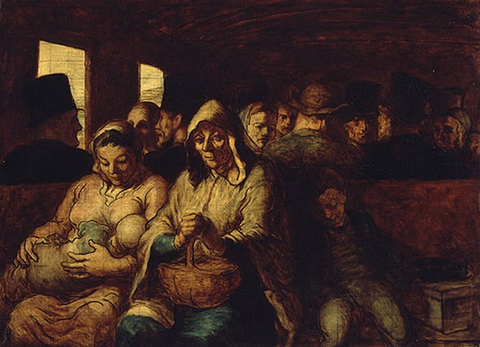 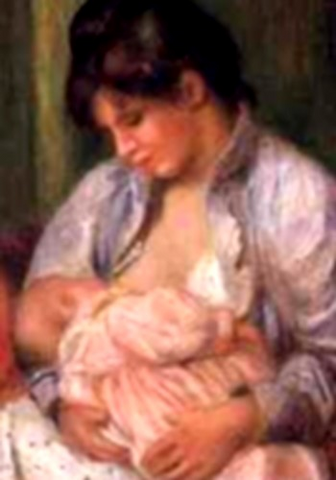 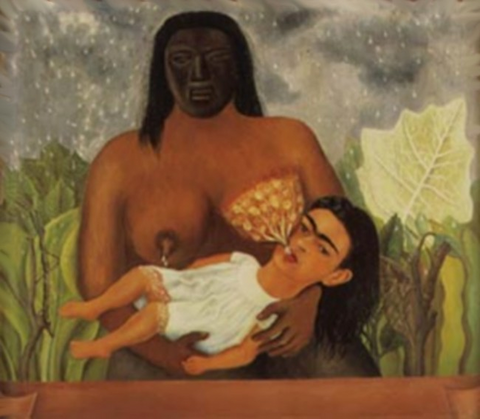 The last two centuries will see flourish representations of breastfeeding as a happy exaltation of the mother-child relationship (Aline nursing her son, Renoir, 1888, or Louise breastfeeding her child, from Mary Cassatt), or as a gesture embedded in everyday life, either among the rich (before the ball of Edouard Debat-Ponsan) or among the poor (the car in 3rd class of Daumier(, in 1863, the pay of the reapers, in 1882, or made day, 1888).

In the 20th century, found above all things in the beginning (Renoir, Picasso), less toward the middle of the century, sign of disaffection of breastfeeding. The end of the century saw a revival, a renewed interest and a more common practice, whether in paint (Toffoli), drawing, sculpture, comics, photo or film. But, you know, because this is news.

(1)Maurice Vloberg, the Virgin and child in french art, B. Arthaud Editor, 1933.
(2) the allegory in painting - the representation of the charity in the 17th century, catalogue of the exhibition at the Museum of fine arts of Caen, June 27 - October 13, 1986.
(3) Marie-Claude Delahaye, tits and nipples, Editions frame Way, 1990.
(4) Thomas Peter Kunesh, The nickname-zygodactylous gesture of the lactating goddess: evolution and migration, 1996, address darkfiber.com/pz/front.html 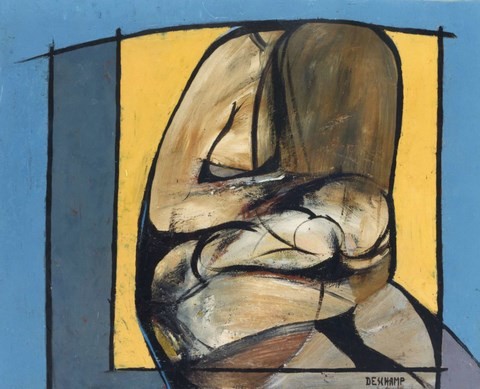 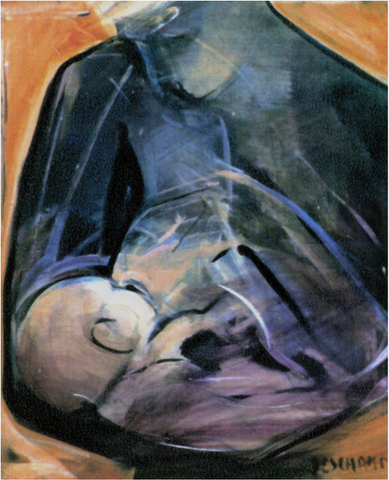